Manufactured and Sold by:

Thelagaadi Private Limited
42, Panchsheel Enclave, JLN Marg, Jaipur - 302018
care@thelagaadi.com
It began as five Super Heroes on five separate adventures, but when those missions dovetailed into each other, the teaming of those five heroes resulted in the formation of the greatest and longest-lasting heroic alliance ever know, THE JUSTICE LEAGUE. Since then, The Justice League remains true to its original mission - Truth and Justice for all.
Thela Gaadi is proud to present the official DC Comics' Justice League Merchandise in association with Warner Bros.
PS: Since not all Super Heroes can wear a cape, we present you with our Super Hero Socks Collection to make you feel the same.

These products are non-returnable and non-exchangeable due to Hygiene issues. However if any of the product is delivered damaged or if there is any manufacturing defect then initiate return within 7 days of delivery.

Any product purchased in a sale will not be eligible for return or a replacement. 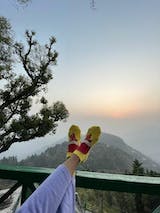